“God has been so good,” Lee Bakker reflected on his life of blessing and trial.  Lee married Lois, his high school sweetheart, while on 30-day furlough from the hospital during WWII.  He and Lois lived in Wellsburg, Iowa where they raised four boys.  We were and are so proud of our boys.

Lee found himself in the role as the primary caregiver when Lois developed rheumatoid arthritis in her hands and knees and then when she was around 50 received the devastating news that she had cancer.  Lee remembered Lois’ one wish that she would see all four of her boys marry Christian women before she died.  The day after their youngest son, Jon, got married God called her home and released her from the pain of this world.

In 1979, the Lord blessed Lee again when he met, Thelma Oostendorp, the librarian at Unity Christian.  Thelma lost her late husband and two children as a result of the Hudsonville tornado of 1956.  The Lord was surely in their union because they met when Lee was living in Iowa and Thelma in Hudsonville.  Lee recalled, “Not only was I blessed by being a husband to a wonderful new wife, I was blessed by being a father to Thelma’s only surviving son, Dr. John Oostendorp, and his loving wife Darla.”  Thelma and Lee enjoyed traveling.  Thelma was an insatiable reader, enjoyed crossword puzzles, and taught Latin.

On April 8, 2011, Thelma and Lee moved to Sunset Manor & Villages.  It was there Lee noticed Thelma having difficulty with memory loss, directions, and completing familiar tasks.  These were early stages of dementia due to Alzheimer’s.  Once again Lee found himself in the role as the primary caregiver for his wife.  It was a trying time both emotionally and physically.  Lee tried to connect with Thelma by recalling fond memories from their travels together, and Thelma would say, “That must have been with your first wife.”  “That was hard to hear,” Lee recalled, “I only went there with Thelma.”  Lee continued, “I never brought our travels up again.  Alzheimer’s is a terrible disease; it takes the mind and seemingly a person’s purpose.” 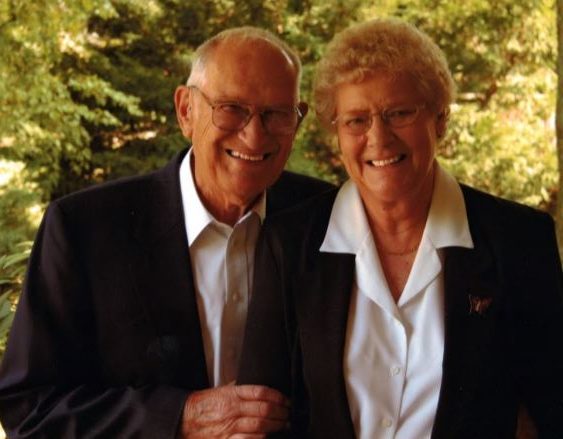 The dementia advanced to the point where she no longer recognized Lee or her son.  ”She always thought I was her father and when her son, John, came to visit, she thought he was her brother.  This was heartbreaking,” Lee remembered.  “Whenever I was able to leave our room,” Lee added, “my thoughts were always, ‘what was Thelma up to.’  I loved her so much, I couldn’t leave her alone.”

Thelma and Lee moved to Reflections, Sunset’s specialized memory care facility at the Manor & Villages.   “The people in Reflections were so good, Lee recalled.  “It takes a heart to do what they did for my Thelma.  The thing I would recommend to people with a family member with dementia, seek help, because there is help.  If you can afford it, don’t keep them at home.  It gives you so much peace of mind knowing they’re with someone who can care for your loved one the way they need to be cared for.”

“After Thelma went home to be with her Lord, I traveled back to Iowa for Thanksgiving.  My boys said, ‘you know dad you look a lot better.’  I didn’t think much of it, but I think it was the stress” Lee recalled.  “Thelma asked me once, why I was still married to her.  I said when we married 35 years ago at Hillcrest CRC, I married you for better or for worse, in sickness or in health.”

“With misty eyes and a soft tone, Lee whispered, “I loved my first wife so, so much.  I was her caregiver for a long while.  After my first wife passed away, I thought I could not love like that again.  I cared for Thelma during her struggle with dementia.  Looking back, I am so fortunate I had Lois and Thelma in my life.  My heart is so full.”

When asked what sustained him during those trying times, Lee said, “Love for her and my relationship with the Lord.  I drew strength from Romans 8:38-39, ‘[nothing] can separate us from the love of God that is in Christ Jesus our Lord.’  Looking back, I can see God’s hand of providence, bringing Thelma and I together, guiding us to Sunset, and the compassionate and knowledgeable people in Reflections.  They have a support group now specifically for caregivers.  Caring for your loved one and managing the symptoms of dementia, puts a lot of stress on the family and it is good to rely on people like those at Sunset’s Reflections who are caring and know how to serve individuals and families dealing with dementia.”

“I am looking forward to heaven, even a sinner like me.  No one deserves heaven.  I don’t know what it is going to be like, but I know it is a wonderful place and Jesus is going to be there.  Until then I want the light of Jesus to shine through me to all whom I come in contact with every day.  God will sustain you, as he did me, even though I may not have realized it all the time.”