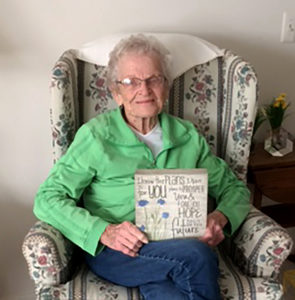 Throughout her 91 years, Marie (Timmer) DeVries has been nurturing bodies and souls. God placed loving people in her life during her formative years, and she has been paying it forward ever since.

Marie’s parents emigrated from the Netherlands for a better life. They bought a farm in Dorr, and although they worked from dawn until dusk, they lost it during the Great Depression.

“It broke my dad’s heart,” says Marie. “He then became a tenant farmer, and we lived in many different homes. Some were not so wonderful, but you just have to deal with it.”

Marie’s older brother kept track of the family’s moves and determined that he and Marie were educated in 11 different one-room schoolhouses.

“We were very poor, and we each had two sets of underwear,” recalls Marie. “Even though we had to walk to school in the winter, we had no snow pants but we did have long cotton socks. At night we would wash out our underwear and socks and let them dry on the cookstove in our house, hoping they’d be dry in the morning.”

Marie continues, “I had many lovely teachers, but one especially sticks out in my mind. She was so sweet, and she would let me clean the chalkboards.”

One lunch hour, Marie walked to the general store in Moline and saw a beautiful valentine card that cost a nickel. She bought the card on her family’s tab and gave it to her teacher.

“A nickel was a lot of money in those days,” she says, “so that did not go over very well at home. But my teacher loved the card.”

Marie enjoyed high school as well, and she dreamed of becoming a nurse. She had a scholarship to Western Michigan College, but took a secretarial job because earning money was top priority. Her boyfriend, Nelson DeVries, served in Africa, Italy, and France as an Army anti-aircraft gunner during World War II, and two years after the war ended they were married. The couple had five daughters and two sons.

“When our youngest was in junior high I was working in the office at Calvin Christian High School,” recalls Marie. “Some of the girls were going to JC (Junior College) for their LPN and when a JC instructor came in I asked him, ‘Do you think they would take a 50-year-old?’  He came back later and told me I could start in August. Nels paid the tuition and said I had to promise to take care of him when he was old.”

After she graduated, Marie worked in oncology and volunteered at Faith Hospice. Her favorite verse is Jeremiah 29:11 — “For I know the plans I have for you,” declares the Lord, “plans to prosper you and not to harm you, plans to give you hope and a future.”As Marie worked with people in challenging circumstances, she tried to encourage them and bring God into the conversation with words such as these.

Nels and Marie began volunteering for CRWRC (now World Renew). Over the years they went on 13 three-week assignments, providing disaster relief all over the United States. They slept in whatever accommodations were offered to them, once in a military bunkhouse. Marie recalls that the boards that were placed between beds for privacy did not muffle the “loud and consistent” sounds of a snorer on the other side.

While participating in relief efforts, Nels and Marie witnessed destruction of homes firsthand. “Many roofs had to be replaced,” says Marie.  “Homeowners’ damaged possessions were piled by the roadside. It was very interesting to meet many people and we were blessed to help them.”

After the DeVrieses retired, they heard about Sunset’s Meals at Home program at a church meeting. Volunteers were needed to deliver meals and groceries to the homebound in the Grandville, Jenison, and Hudsonville areas.

Marie says, “We thought that would give us something to do together, so Nels drove and I did the knocking and the running. We just wanted to help people and have a purpose, and the day we joined, we knew it was the right thing to do.”

After Nelson passed away in 2004, Marie continued to volunteer on her own. She’s been delivering comfort food for 20 years.

“The food is so good,” says Marie. “It’s straight from Sunset’s kitchen, and it is packaged so lovely.  I like people, so when I bring the food I ask questions and make it a point to get to know them, and I get so much out of it too. I don’t believe that God meant for us to sit in a rocking chair for the rest of our lives, so if you’re blessed with physical health you should do something.”

Marie feels blessed to be able to live independently. She is grateful for a loving family and enjoys being involved in the lives of her 13 grandchildren and 37 great-grandchildren, many of whom have come along for the ride on Marie’s rounds.The little volunteers are eager to knock on doors and deliver the packages. Marie says, “People love to talk to them, and the kids love to help. And afterwards they get to choose the restaurant for lunch.”

For the past 12 years, Marie has also volunteered at Love INC and when her daughter Karen Van Dyke retired, Marie recruited her as well. 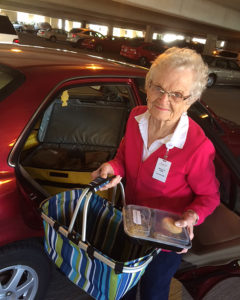 “My mom is so interested in people,” says Karen. “She is a great encourager. Sometimes she’ll say, ‘I have to deliver meals to the old people,’ and we remind her that she is older than most of the people on her route.”

“I was so overwhelmed, and very thankful,” says Marie. “I like to have a motivation to get up in the morning, and as long as the Lord gives me health, I’ll keep doing it.”