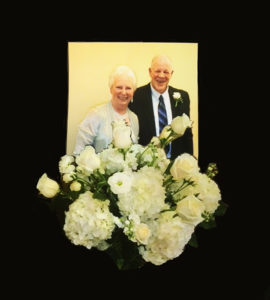 On November 22, 2015, Morrie and Marilyn Gabrielse were married in the Waterford Place lobby, a first in its history.

Marilyn felt the same way. She and Morrie had both been recently widowed, each after 53 years of marriage. Neither of them had exactly planned to move to Waterford.

Marilyn recalls visiting some friends at Waterford’s café. “They thought I should move here,” says Marilyn. “I prayed before lunch and asked if He would give me wisdom to make the right decision, and He did. He made everything fall in line, and I moved in March of 2013. I could not deny that He ordained it.”

Morrie says, “A childhood friend of mine who lived at Waterford kept telling me to check it out, so I took the tour. I kept saying, ‘I don’t want any pressure, I won’t be moving here.’ On the way out I poked my head in the kitchen and talked to the chef. I walked toward my car and still had no intention to move in.” But inexplicably, Morrie changed his mind. He returned to the office and said he would bring the deposit that afternoon, and moved to Waterford in 2014.

A shared love of music was the first connection for the couple. Marilyn had been involved in glee club and various choirs during high school, and singing continued to be a big part of her life. According to Morrie, he can’t carry a tune but he has always enjoyed Southern gospel music.

He says, “Right after I moved in, I had four tickets to a music event in Shipshewana and I asked some guys if they could go. They said I should ask Marilyn, so I did. She got two friends to join us and we had a good time.”

Morrie planned another trip to see the Purdue Glee Club, but the other residents dropped out at the last minute — except for Marilyn.

“I told Marilyn it was her decision, and we decided to give it a whirl,” he says.

They went to dinner before the concert. “I was kind of nervous,” says Marilyn. “I thought, What are we going to talk about? Then the food came, and Morrie said, ‘Let’s pray.’ My hand was on the table and he put his hand over mine. He prayed aloud and I thought, Now I know something important about this man.I knew who he was inside, and that made conversation easier.”

Morrie and Marilyn continued to enjoy each other’s companionship, attending events together and visiting Morrie’s place at Sandy Pines. They determined they would just be friends., but one day Morrie professed his love for Marilyn, and their feelings for one another grew.

Marilyn says, “When we told the director and the head maintenance man that we’d like to exchanged vows at Waterford, where we met and fell in love, they said, ‘We’ll make it happen.’”

Word got around quickly, and other residents were eager to share in the joy. The ceremony was celebrated by 180 guests, and members of both families participated. Marilyn’s son gave her away, and Morrie and Marilyn’s children stood up with them during the ceremony. Marilyn’s daughter sang “O Perfect Love,” and her grandson played the piano. Morrie’s granddaughter baked three delicious cakes, and another granddaughter took pictures.

Marilyn says, “The first thing the minister said was that he didn’t have much to say, since  we had 106 years of marriage between the two of us.”

The couple chose Philippeans 2: 3-4 for their wedding verse: “Do nothing out of selfish ambition or vain conceit. Rather, in humility value others above yourselves, not looking to your own interests but each of you to the interests of the others.” The verse has become the basis for their marriage.

“I think an attitude like that can lead right into what a marriage should be,” says Marilyn. “We’re not always 100 percent successful at that, but we’ve had very few bumps in the road — you could count them on one hand.”

Morrie adds, “And the bumps in the road, if there were any, have been over food. I’ve been in the food business my whole life and I love cooking and feeding people. Marilyn’s a gourmet chef, and we each have our own ideas. I thought she’d love it if I cookedfor her,but she’s energetic and ambitious, so we had to come to some sort of agreement.” 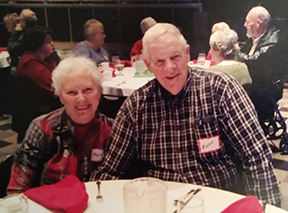 The couple found ways to compromise, learn from one another, and combine efforts. They hosted a dinner in which Morrie grilled fillet mignon to order for thirty residents. It went over so well that they hosted three more just like it. They’ve brought scores of people for pancake breakfasts to their place at Sandy Pines over the years, and after Sunday night concerts, all are welcome to enjoy pork barbecue sandwiches.

Morrie credits Marilyn for helping him lose 80 pounds by making healthier choices, and they have each learned to appreciate one another’s unique characteristics.

“It’s my nature to always be doing, and to hurry,” says Morrie. “Marilyn is methodical and organized, and she likes order. I learned quickly to put my shoes away.”

In February, Morrie retired from a long career in the foodservice industry. He says, “I never played cards or dominoes in my life until I moved here.” Now it’s one of his favorite activities. Before moving to Waterford, Marilyn was very involved in women’s ministry, and she felt called to lead a women’s Bible study at Waterford.

Morrie and Marilyn believe their marriage has allowed them to enjoy many new experiences, such as travel. They took a train trip out West, went on an Inspiration Cruise to Hawaii, and visited Morrie’s granddaughter, who serves as missionary in Honduras. They especially appreciate how their families, which include 17 grandchildren and 14 great-grandchildren, have not only accepted but embraced them in this new stage of life.

Morrie says, “Her family made me feel welcome from the get-go, and she gets more hugs and kisses from my family than I do. But we know nothing takes the place of the parent they lost.” For Marilyn, taking the step of getting married was important. “I love Morrie more all the time,” she says.

Morrie adds, “Every morning I thank God. He’s really blessed us. We thought we’d be alone the rest of our lives, but our marriage is like frosting on the cake.”