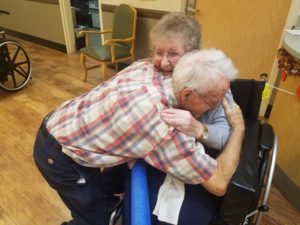 According to an article in Psychology Today, the benefits of volunteering include:

Bob Hill, a super volunteer at Brookcrest, could check all of these boxes but the last one. On paper he’s a retiree, but he hasn’t slowed down since he was a young boy.

When Bob was in eighth grade, his teacher gave the class an assignment to write about what they’d like to be when they grew up. The father of Bob’s sixth grade girlfriend was a preacher and Bob thought that would be a good fit for him too, so he went about gathering research. The preachers Bob interviewed mentioned that they’d been required to take many English and history classes, among other things that didn’t sound entirely appealing to him. When he interviewed some band directors, the light bulb popped on. 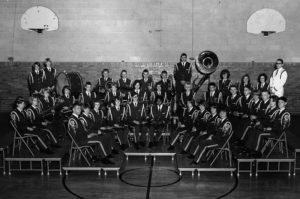 Born in Alma, Michigan in 1938, Bob remembers a carefree childhood in which kids played in the streets until the lights went out. In sixth grade he played baritone in band, and he purchased an accordion in ninth grade with money he’d earned delivering papers and mowing lawns. In high school, Bob became a drum major in the marching band. Already a young entrepreneur, Bob was hired to play his instruments at events and gave accordion lessons to over 20 students.

While pursuing a music degree at the University of Michigan, Bob hitchhiked to see Mary, still his sweetheart, on weekends. They were married on June 30, 1960. Bob was hired to be the band director and also teach math in Lawton, Michigan and earned his master’s in mathematics. It didn’t take long for him to become the chair of both the math and music departments. Mary became a registered nurse and worked at Bronson Hospital and later Spectrum. Life grew busy when the Hills had children, five in all.

An old joke says that there are three reasons to become a teacher: June, July and August, but Bob didn’t take a summer vacation. His starting salary was $300 per month, and he needed to supplement the family income.

Bob had joined Boy Scouts as a youngster and earned the prestigious Eagle Scout rank in 1953. It seemed natural to continue with the program in a leadership capacity, and when he finally retired from the Boy Scouts of America he had chalked up 69 years in various roles. His skills also made him a good fit for summer camp counseling positions throughout his adult life. The Hills loved being around people and were deeply involved in their church community, teaching Sunday School and helping with youth programs. Bob was able to contribute his musical talents to churches as well, in choirs and by playing his instruments.

The Hills’ lives changed dramatically in 1995. Bob says, “On her way to work at the hospital, Mary had a massive stroke. She was in a coma for 38 days, and the doctor wanted to pull the plug. But one day a nurse reached over to take Mary’s teddy bear away from her and she pulled it back.”

When a test was administered to assess Mary’s responsiveness, she scored a 3 out of 330. Bob recalls, “The doctor said, ‘It would take a miracle for Mary to pull through, but I believe in miracles.’ I said, ‘So do I.’ ”

During a visit soon afterwards, Bob was singing “Jesus Loves Me” to Mary and he asked her if she would join him in the chorus. Mary nodded. When some women from church came to sing with her, Mary actually joined in. The shocked nurse summoned the doctor, who looked at Bob and said, “I see you got your miracle.” 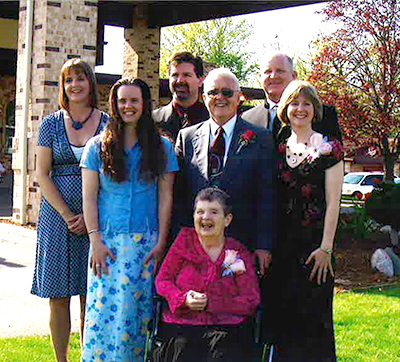 After arduous therapy, Mary came home but she was paralyzed on the left side. Still, she was a trooper, and one day she suggested to Bob that they head to Florida that winter. When Bob wondered if it would work, Mary said, “We won’t know until we try.”

Bob says, “We stayed a few weeks that first time, and when we got home Mary asked, ‘Can we go again next year?’ ” This became a tradition that the Hills enjoyed for two decades. Bob was able to care for Mary at home for 21 years, but in 2014 Mary’s leg swelled horribly as a side effect of new medication, and she came to live at Brookcrest.

Bob says, “At Brookcrest, Mary received better care than any of the other places she was in. She attended all the programs and told everyone, ‘I love you with all my heart,” and everyone loved her.”

Mary died on November 29, 2016. She had impacted many lives at Brookcrest, and Bob was touched that her picture was posted for years afterwards in the therapy department. He still goes to Florida in the winter, where he provides musical entertainment for retirement homes and churches. From April to October, he volunteers at Brookcrest, and on a typical day he arrives at 9:30 a.m. and leaves after supper. He sets up the dining room for meals, brings residents to events and takes them back to their rooms, and helps wherever needed — and of course, he provides lots of musical entertainment.

Bob knows it makes a difference to take a sincere interest in people, no matter what their circumstances, and Brookcrest staff and residents’ loved ones consider Bob’s presence to be an invaluable aspect of the community. Margaret Lam, whose husband Norm has lived at Brookcrest for three years, says, “When Bob interacts with the residents you can tell he truly cares about them. He’s always so positive and he has such a great outlook.” 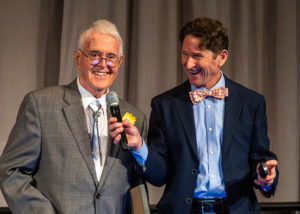 At one recent performance Bob played his autoharp as well as a full-bladed carpenter’s saw, all the while encouraging residents to participate. His constant smile was proof that he loves what he is doing. Residents tapped their feet and sang along to hymns, favorite songs from the past, and even a song Bob had written for Mary because of her love of coffee.

Brookcrest resident Beverly Hoekstra says, “The autoharp is usually used for background music, but he figured out how to make melodies with it. His programs are very well-attended and enjoyable. He sure gives a lot to Brookcrest.”

In 2018 Bob was honored for his lifetime of service by Senior Neighbors at a gala held at Frederik Meijer Gardens. What motivates Bob to devote so much of his time? “I’m retired,” he says. “If I didn’t do anything I’d sit around and be bored. And I enjoy what I do. Brookcrest is like home.” 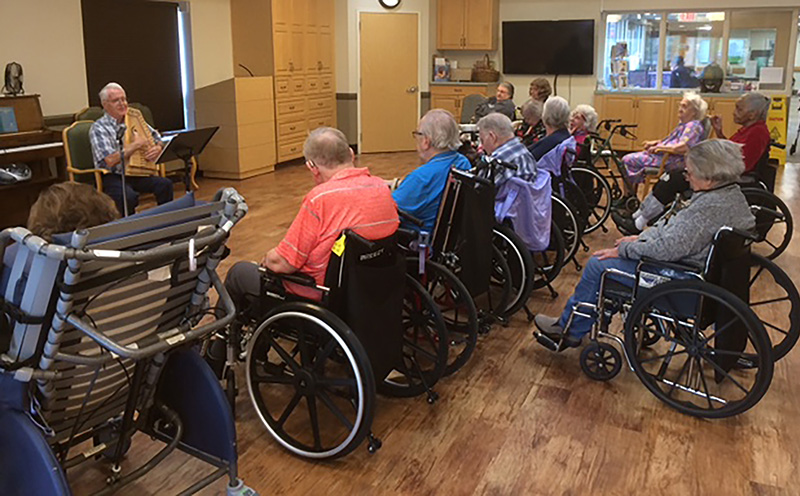 Bob’s musical performances are a big hit with Brookcrest residents