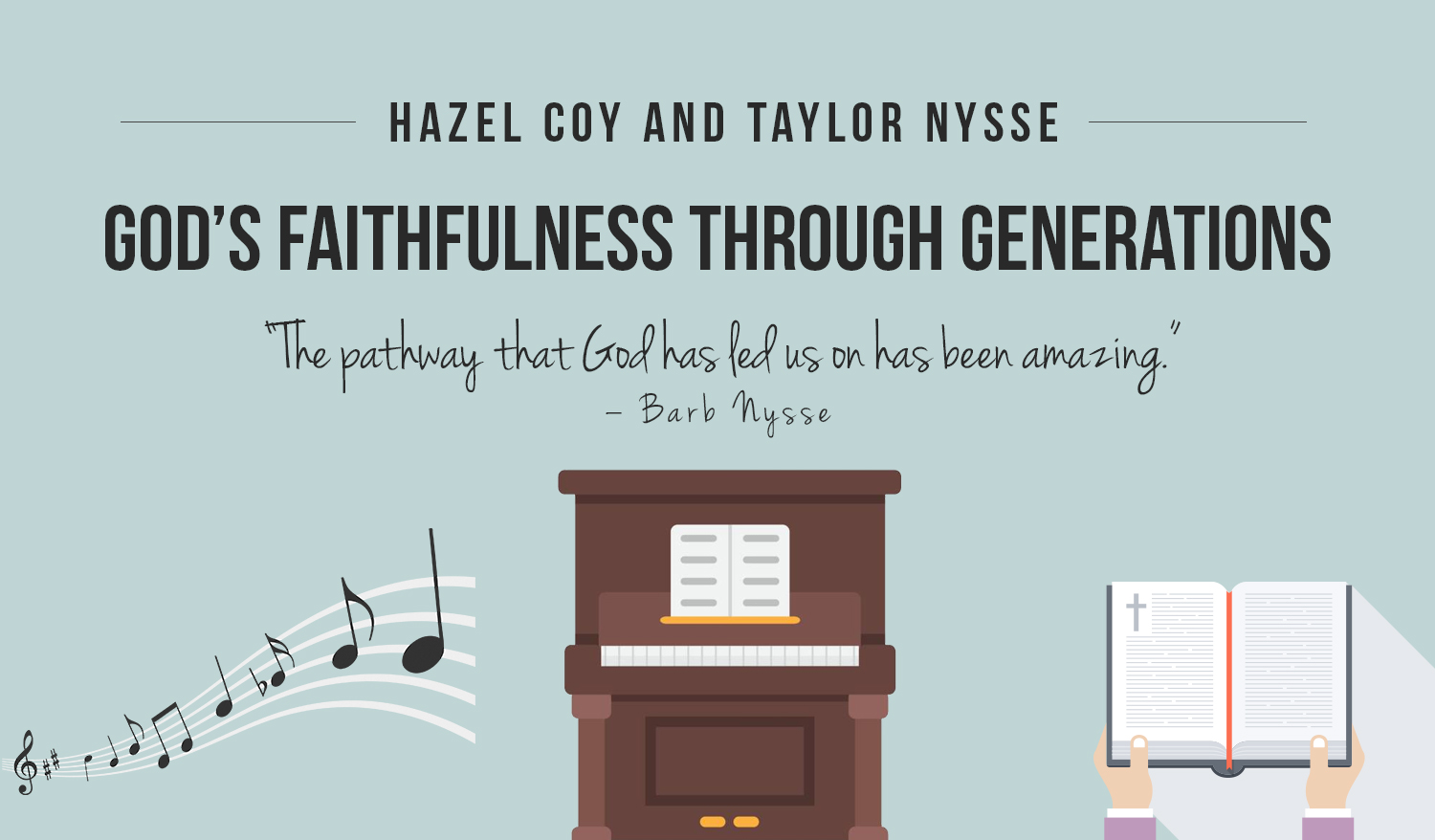 After Taylor graduated from Jenison High School in 1999, she participated in Community-Based Instruction (CBI) and received job training at various locations including a greenhouse, a preschool, and Sunset Manor & Villages.

Taylor knew right away that Sunset was a great fit for her and began helping in Assisted Living. Her duties included setting up for events and participating in hymns sings, where Hazel accompanied on piano well before she became a resident at Sunset. 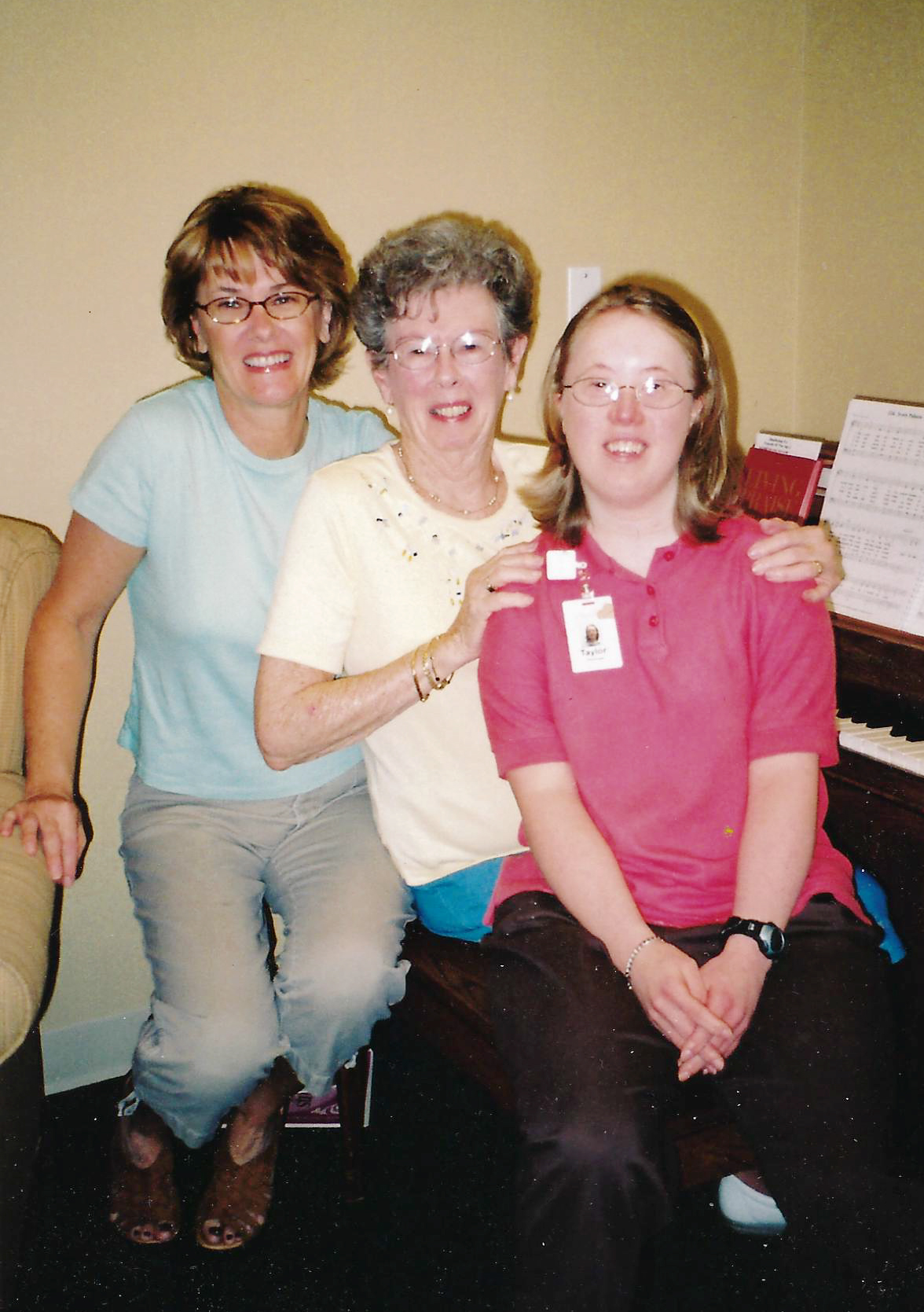 In the past twelve years, Taylor has become an integral part of the Sunset community. She now comes in three days per week and does everything from opening with prayer at Bible studies to passing out bingo chips to helping people with exercises. Taylor has developed strong relationships among the residents and the staff.

“When we walk through the hallways,” says Hazel, “everyone greets Taylor by name. She knows more people than I do.”

Taylor’s favorite job is assisting with hymn sings. She says, “I like the songs. I know the words by heart.” Her favorite song is “How Great Thou Art,” which was also her grandfather’s favorite.

When asked why she has continued to volunteer at Sunset, Taylor says she enjoys helping people.

“It’s a two-way street,” adds Taylor’s mother, Barb Nysse. “They need her and she needs them. Taylor anticipates what she can do, and she really connects with this generation. Her job here is a gift from God. When it’s her birthday her bosses (in the Wellness Department) treat her like a rock star.”

Hazel and Barb agree that Taylor continues to teach them by example. “She’s how we’re all supposed to be,” Barb continues. “She’s forgiving, she never holds a grudge, and she always does the right thing. Taylor is the angel that lives at my house.”

Taylor had two open-heart surgeries when she was a baby. When she had another at the age of twelve she was not expected to live a year, but she defied the odds. “The pathway that God has led us on has been amazing,” says Barb.

On her Fridays off, Taylor spends part of her day with Hazel. After lunch in the dining room, they return to Hazel’s room to play Skip-Bo, which they both play to win.

“It’s all I can do to win once in a while!” says Hazel. “I’m so thankful we’ve had all those Fridays together. I’ve gotten really close to Taylor.”

Hazel points to God’s leading and faithfulness in her own life. She was born in Zeeland, Michigan on December 20, 1919. During the Great Depression, her father had a steady job at the Zeeland Post Office. Hazel recalls that her mother was very patriotic and expected the family to do without during difficult times. She substituted oleo for butter and canned most of the family’s fruits and vegetables.

After graduating from Zeeland High School, Hazel took secretarial courses at Davenport College and then married Ken Coy in 1940. As the United States’ involvement in World War II became imminent, Ken joined the Marines and Hazel stayed with him in San Diego, California, while he waited to go overseas. When Ken headed for the Pacific front, Hazel returned to Grand Rapids, where Davenport placed her as a secretary at Keeler Brass.

“It’s a good thing I had a job,” she says. “I made good friends with other young women in the same position—our husbands were in the war and we were lonesome.”

Hazel’s starting salary was $60 a month, which went a long way in those days. She says, “I had lunch every day at the drug store across the street. Fifteen cents bought a slice of toast, a piece of cake, and a glass of chocolate milk.”

Hazel was quick with shorthand and accurate with typing, and over the years her responsibilities grew. She loved working with numbers and knew she had to come out to the penny when she tallied up sales figures. Eventually she was trusted to help with the Keeler family’s investment portfolio.

“They advised me to invest, too,” she says. “I put away a little at a time and I couldn’t believe how much it grew.” House prices were climbing, and six months before Ken returned home Hazel purchased a home for $7000. 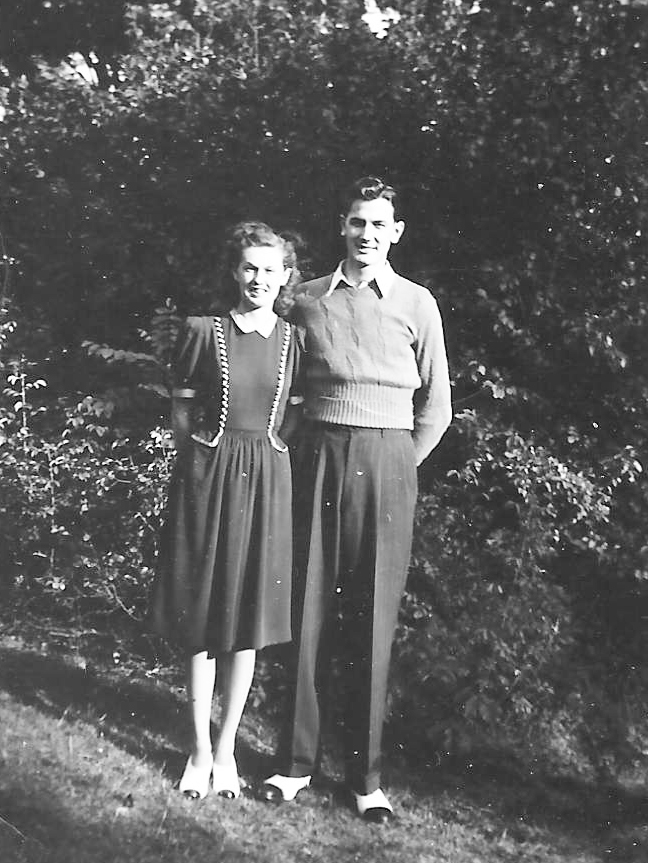 Ken’s division had fought in five major Pacific battles, including Iwo Jima. Hazel recalls with gratitude the kindness of her bosses when, for a seven-week period, she had no communication from Ken.

“When Ken came home he was skin and bones,” she says. “While he was overseas he’d had malaria and high fevers, and for the rest of his life he had terrible headaches.” Ken worked in various jobs and Hazel continued to work at Keeler Brass to help support the family. The Coys had two sons and a daughter, and the company offered Hazel flexible hours when the children were young. When the owner’s son took over, he asked Hazel to become his full-time secretary.

“I suppose working full time was quite something for a woman,” she says, “but I loved every minute of it. I felt I was using my talents.” 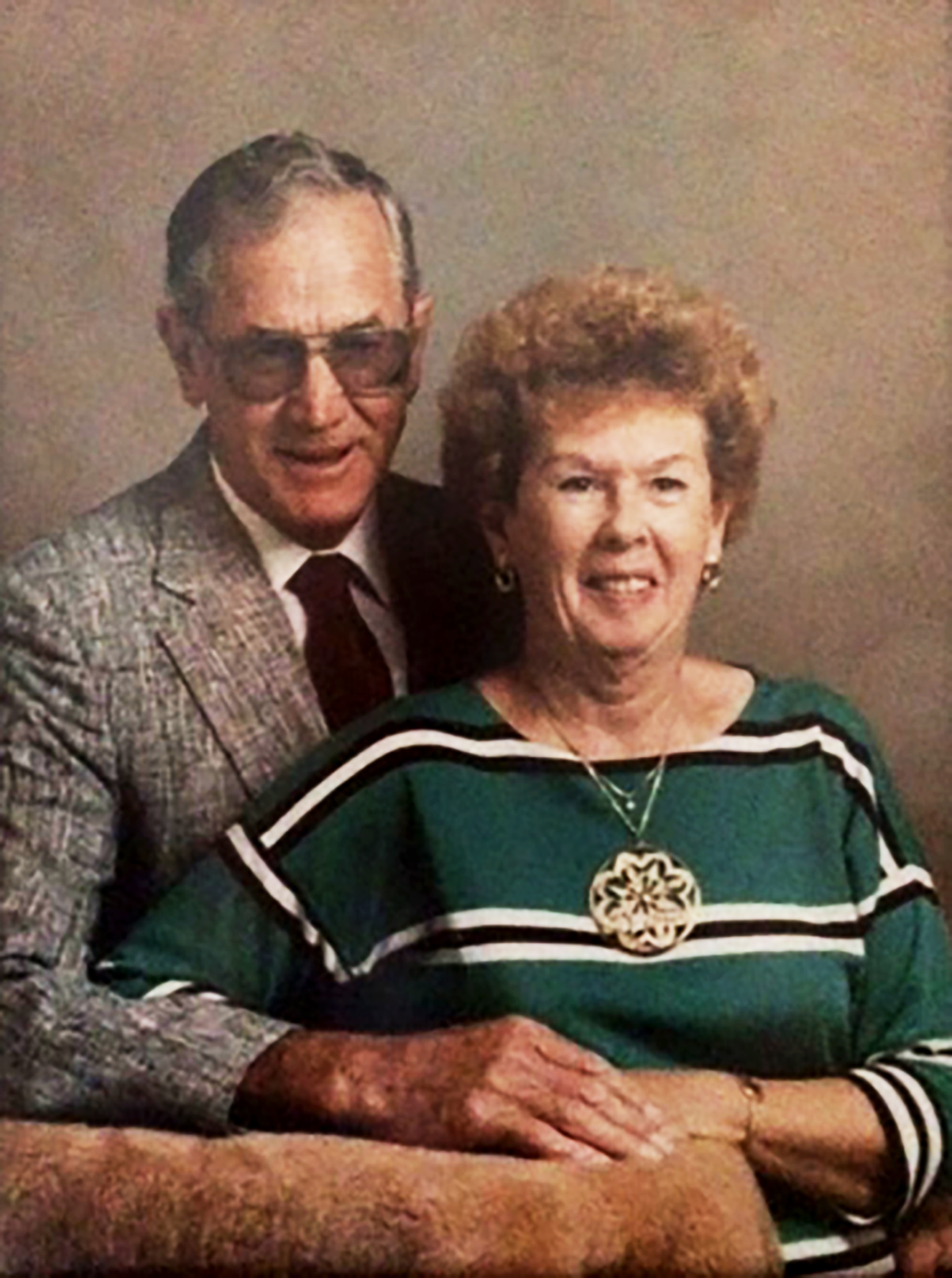 Ken retired early, and after 37 years at Keeler Brass, Hazel decided to do the same. Ken’s lifelong wish was to live in a warm place, so the Coys purchased a home in Florida, where they enjoyed the winters for 17 years. Ken passed away in 2004 and two years later Hazel moved to Sunset. She has five grandchildren, four great-grandchildren, and another on the way.

As Taylor’s grandparents and parents have encouraged her faith, Hazel remembers how her own ancestors did the same for her. Her grandmother often sang “All the Way My Savior Leads Me,” which has become one of Hazel’s favorite hymns. 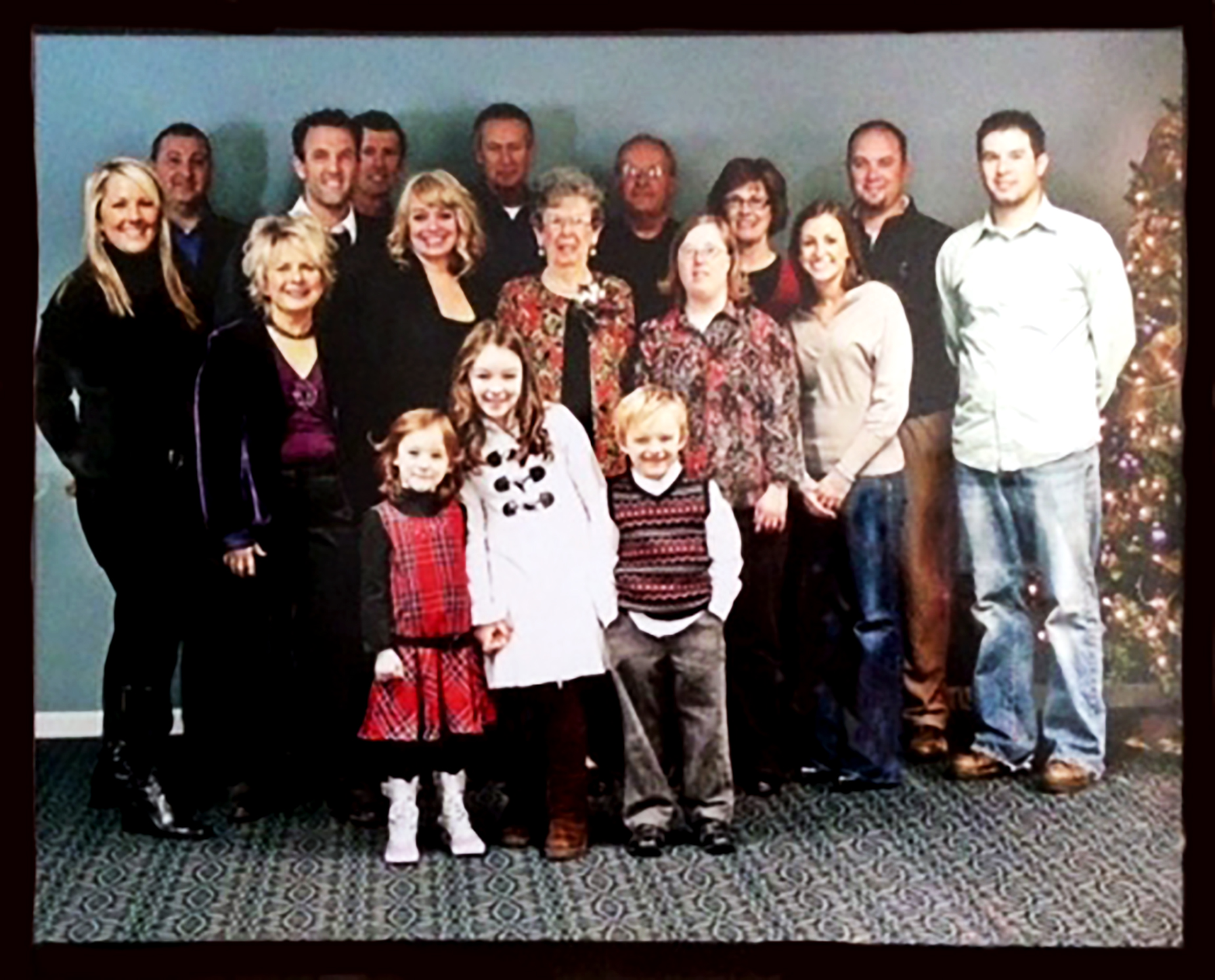 “I look back at all I went through and I don’t think that, when I was young, I saw God’s hand like I do now,” she says. “But you learn so many things along the way, and then you look back and see how the Lord was leading you all the time. Now I see it every day, even in the little things. He seems so close, like He’s walking beside me all the time.”