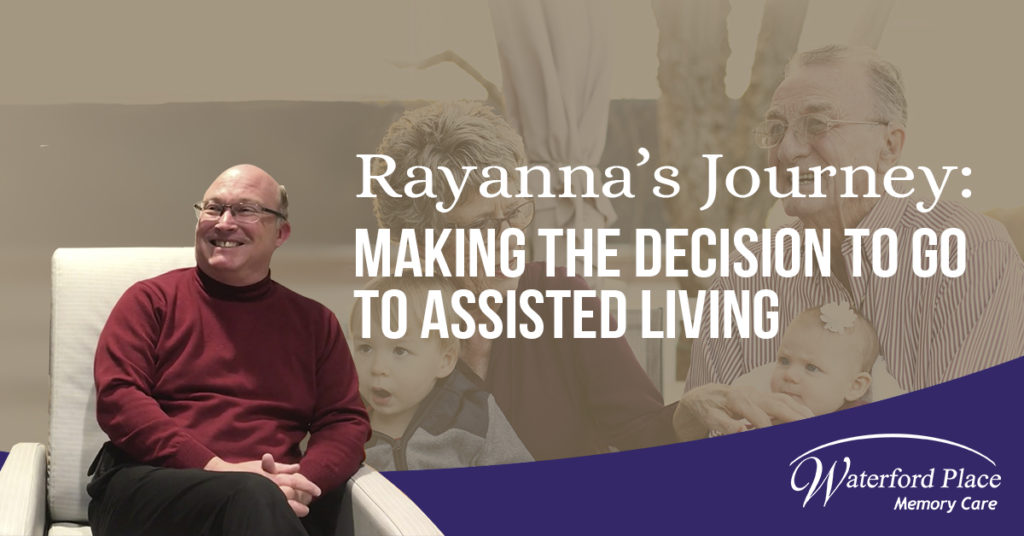 Over the next year, we continued our regular discussions with staff at Waterford Place trying to determine if and when was the right time to make a move to assisted living. We had three concerns about Rayanna: that she was safe, comfortable, and happy. Safety was the primary concern. There had been phone calls during the day that Rayanna had been confused and was wandering around the facility looking for someone to pick her up and take her ‘somewhere.’ Since she was living on the ground floor, we were very concerned that she might simply walk out her patio door without being noticed and something terrible would occur. We noticed that she was acting upon her dreams as if they were reality. We also noticed that her ability to keep her living quarters orderly, the spotless condition that she normally did, was faltering. One of the biggest indicators of that was a growing pile of mail on a table in her second room, which doubled as an office. We finally went through all that mail over the course of a weekend and found many instances of bills that had not been paid, and letters that had gone unanswered. Fortunately, there was nothing that couldn’t be fixed without a little effort, but it did serve as a catalyst to take over her finances. Fortunately, we had convinced Rayanna to get legal documents in order several years before all this started. We simply executed those documents which included a Durable Power of Attorney and Patient Advocate for Medical Decisions. One of the other things we had done years before was to have our names included as a signatory on her checking and savings accounts. Those two things made this transition of taking over finances much easier!

We finally realized it was time to make the move to Assisted living when, for several days in a row, we would visit in the morning, and she had her dining room table made up all fancy as if she was having guests in. When we asked if she was entertaining, she replied, ‘Yes, (my son’s name) will be getting up soon, so I have breakfast ready!’ Unfortunately, my son was in Navy boot camp at the time. We had to be very careful about how we handled this event. If we bluntly pointed out she was incorrect, she would get agitated and angry. If we offered to help put things back in order, she would be offended and want to do it herself. But we couldn’t just let it go either!

God works in mysterious and glorious ways. Right at that time, a residency was becoming available in the Assisted Living Center. We had been struggling with the knowledge that Rayanna needed to have more daily assistance, but we also didn’t want to have to go to a facility with shared living quarters or where she wouldn’t know anybody. This way, she could just be moved over to the other wing, in a private room, and she could still visit her friends whenever she wanted. We did spend several weeks discussing this with her, and for the most part, received a great deal of resistance. But we had to make the tough decision knowing that she didn’t even realize what was happening to her. One morning, my wife took Rayanna to her hair appointment, then to breakfast and then spent a couple more hours driving in the country. In the meantime, I had several friends help me move what furniture could be moved into the Assisted Living residence. When Rayanna came back a few hours later, we introduced her to her new home! It didn’t go very well at first, but we sat with her on the deck for a while and then had dinner with her in the dining room, and she accepted the move. It also helped that some of her old neighbors from the Independent Living were now in the Assisted Living wing, so she was able to catch up with them!

The following year saw a steady and rapid decline in both Rayanna’s mental and physical abilities. It was a common occurrence for us to hear about how she was involved in a party ‘last night’ and we received reports of her walking into other residents’ rooms uninvited. We tried various things in coordination with her doctor, but none seemed to have a lasting effect. More frequently, she would not be able to call us by name and constantly needed to hang onto something while standing or walking. Her personal doctor had recommended, even ‘prescribed’ her to use a walker but she absolutely refused to abide by that. She fell several times and fortunately, none of the falls were serious enough to break any bones or require hospitalization, although they very easily could have been disastrous. Just before she moved into Hope Harbor, she was using a wheelchair on a regular basis.

It was during this time that we as a family required a lot of support. Witnessing the steady decline in physical abilities is one thing; one could even say natural. But the decline in mental abilities was very difficult to witness on a daily basis. We sought out and spoke with our pastor quite regularly, and we formed our own little support group of friends who had either gone through or were currently going through similar experiences in their own family. Keeping in contact with the staff at Waterford and being on a first name basis with them, also helped us to cope with what was happening. Knowing Rayanna was in good hands, being well protected and taken care of, helped greatly to calm our fears.

In September of 2018, we made the move to Hope Harbor in the Memory Care wing. This was done after extensive research into the SAIDO discipline, discussions with Waterford and Rayanna’s personal doctor, and tours of the new facility by our entire family. Getting our entire family together at the same time was a trick in itself as our family members are dispersed all over the United States and Europe! We were very worried that Rayanna’s stubbornness and independence would cause trouble for the SAIDO classes, but we have been pleasantly surprised. Although there are some occasions that she doesn’t want to participate in the sessions, for the most part, she completes them without complaint. In addition to the SAIDO sessions, the socialization aspect of Hope Harbor has had a big impact on Rayanna’s demeanor. In Assisted Living, she tended to stay in her residence and isolate herself from other personal contact. However, in Hope Harbor, she has meals with the other residents and participates in various activities with the other residents and staff. Now, when we visit her, we generally find her happy and smiling, which didn’t happen as often when she was living in Assisted Living. Rayanna gets quite a bit of attention in Hope Harbor including conversation, doing simple puzzles, sing-a-longs, and other activities. We can’t say enough about the staff’s care and attention for all residents.